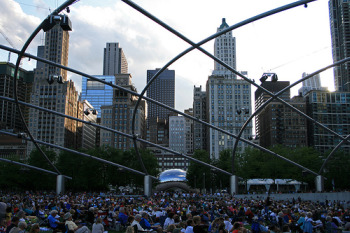 To many people, Millennium Park and Grant Park seem indistinguishable from one another, and truth be told Millennium Park is actually located inside Grant Park, in the northwest corner, so you’d be forgiven for lumping them together. No matter what you call them, the parks combine to house some of Chicago’s most iconic spaces, and to host some of the cities best events, many of which are free. Here are some of the best free summer events in Grant and Millennium Parks.

Since the 1930’s, the Grant Park Music Festival has brought free music performances to the “City’s Front Yard” and now draws an annual audience of over 300,000.The Grant Park Orchestra performs classical music from composers like Vivaldi, Beethoven and Tchaikovsky as well as the works of modern composers from around the world. Dogs are not allowed, seating is first-come, first-served, and you can bring food and drink, but alcohol is technically not allowed. Performances are scheduled at 6:30pm on Wednesdays and Fridays, and at 7:30pm on Sundays from June 5 to August 20. You can also drop by for one of the many rehearsals scheduled throughout the week. For the full line up, click here.

On Mondays at 6:30 from May 23 to July 25, Millennium Park will host  the free “Downtown Sound New Music Mondays” events with an amazing line up of big names and up-and-coming performers like Iron and Wine, Blonde Redhead, Low, Bonnie “Prince” Billy, Ted Leo, the UK’s Seefeel, France’s Ben L’Oncle Soul and Niger’s Bombino, along with Chicago favorites Rachel Ries and Andre Williams. The best source of information on these events can be found on the Facebook page. Other Monday night concerts are part of the Dusk Variations events  which mix pop and alternative genres with classical music.

Picnic in the park and hear a  live bands, DJs, or open rehearsals every day, including Jazz, Blues and Beyond on Mondays, Electric Picnic’s electronic sounds on Saturdays and American Roots on Sundays. Open rehearsals for the Grant Park Music Festival run June 14 to August 19, typically on Tuesdays, Wednesdays and Fridays from 11am-1:30pm and Thursdays from 10:30am-1pm. 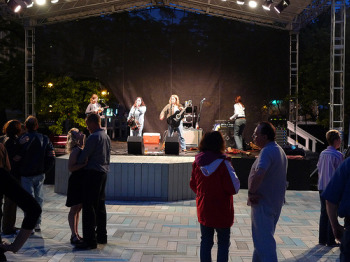 The Chicago Department of Cultural Affairs, hosts Chicago Summer Dance, on  Thursdays through Sundays from July 7  to September 18 in Grant Park. Forty-two different live bands will play swing, waltz, salsa, cha-cha, ballroom, big band, folk, tango and more for locals and visitors who can take free dance lessons from professionals or just freestyle it to the music. The eleven-week event is the largest festival of its kind in the United States and attracts over 100,000 people over the course of the summer.

Each starts with a free one-hour dance lesson followed by two hours of music and dancing on a 4,600 square-foot, open-air dance floor in the Spirit of Music Garden in Grant Park. The lessons start on at 6pm Thursday, Friday, and Saturday evening and at 4pm on Sunday. The dancing ends at 9:30 each night, except for Sundays when it ends at 7pm, and is called off in severe weather.You can find the full line of up dances offered each night, here.

Two different Thursday series are also happening in Millennium Park this summer. Music without Borders takes place on Thursday nights at 6:30 beginning June 9 through July 21and featuring traditional, folk and pop artists from around the globe.  The Made in Chicago jazz  series begins Thursday, July 28 and closes September 1 and features Chicago’s leading jazz artists, preceded by a short set by young  musicians from Chicago-area high schools.