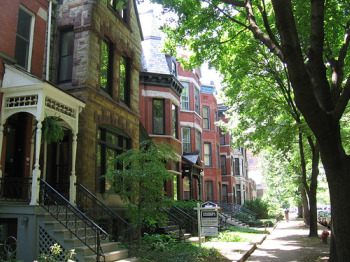 Lincoln Park runs roughly from (south to north) North Avenue to Belmont and from (east to west) Lake Michigan to the Chicago River. Like many of Chicago’s neighborhoods, the area was once home to many Puerto Rican immigrants. Now it is one of the most expensive areas to live in the city. Many of the homes here sell for over $1 million, and the neighborhood contains the most-expensive block in Chicago.

Though the area is home to many affluent families, it’s also the ‘hood where DePaul University is located, which means that young co-eds and post-grads live alongside these rich older families. Because of this, Lincoln Park offers both an abundance of cultural delights like stunning cathedrals, the free Lincoln Park and Zoo, the Peggy Notebaert Nature Museum, and the Chicago History Museum, as well as more….frivolous distractions like a high concentration of bars geared towards college students.

There’s also some excellent shopping to be done in Lincoln Park, at high-end designer retailers like BCBG, Arden B., Banana Republic, Furla, and Barney’s Co-op.

The area is easily accessed via buses that run up and down Lake Shore Drive, as well as by the Red, Brown, and Purple lines of the el, which stop at Fullerton, Diversey, and Armitage.