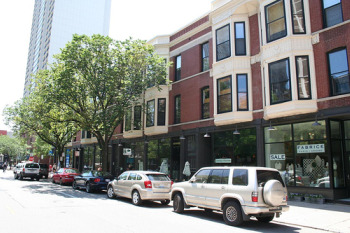 Old Town is located just south of Lincoln Park and is bordered by Armitage to the north and North Avenue to the south. The area has gone through several incarnations. In the 1950’s the area was home to many Puerto Rican immigrants as well as many gays and lesbians (who later moved further north into the Lakeview neighborhood).

Today, the area is home to affluent young singles and families and has a lively nightlife scene, plentiful trendy restaurants and lots of designer boutiques.

Though many of the buildings are newer and the area has a young, trendy feel, there is a lot of history here. Many of the streets and alleys in this area were untouched by the Great Chicago Fire and therefore don’t follow the same grid pattern that the newer city streets do. The el station at Sedgwick is one of the oldest remaining stations.

To the Southwest of Old Town is River North, which runs approximately parallel (to the west) to Streeterville. North of the Chicago River, south of Chicago Avenue and west of the Magnificent Mile, the area has the largest concentration of art galleries in the US outside of Manhatten. It’s also home to hundreds of bars, restaurants, and clubs, including many of the city’s most exclusive, velvet-rope type bars. If you’re single and looking to mingle at one of the city’s hottest bars, head to River North on a Friday or Saturday night.

Superior and Huron, between Wells and Orleans, are the streets of the gallery district so if you’re in the mood to browse some art, this is the place to go. Architecture buffs should wander near State, Superior, Huron and Wasbash to see some of the city’s beautiful old cathedrals, including the Holy Name Cathedral and the St. James Cathedral. Merchandise Mart, a giant building (it even has its own zip code) housing dozens of designs shops and showrooms, is also located here.

The area is currently undergoing a building boom; the population has grown by as much as 35% in the last ten years. However, the areas popularity is driving up rents so it’s also become a more expensive place to live in recent years.