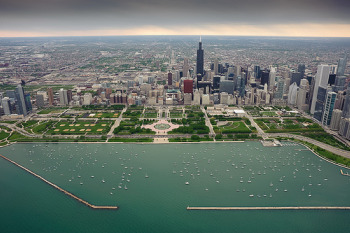 Nicknamed “The City’s Front Yard”, Grant Park is Chicago’s most famous park. This 319-acre park contains Millennium Park, Buckingham Fountain, and the Museum Campus (home to museums like the Art Museum, Field Museum, and Shedd Aquarium). The park was called Lake Park in 1844 when it was designated as “public ground forever to remain vacant of buildings”. In 1901 it was renamed Grant Park in honor of Ulysses S. Grant.

Grant Park is the site of many of Chicago’s most famous festivals, such as Lollapalooza and Taste of Chicago. The park hosts free music and cinema events in the summer, free ice-skating in winter, and was the site of President Barack Obama’s election night rally and acceptance speech on November 4, 2008.

>> more on events in Grant Park

In 2004, a section of the park that was occupied by the rail yards was revamped and made into Millennium Park. The 24.5 acre sub-section of Grant Park is home to some of Grant Park’s most famous attractions, like the Cloud Gate sculpture (the Bean), Crown Fountain, The Jay Pritzker Pavilion and the Lurie Gardens. It contains the world’s largest rooftop garden and is connected to Grant Park by the Frank Gehry designed BP Pedestrian Bridge.

Admission: There is no fee to enter the Park.

Hours: The Park is open 365 days a year but if is off limits between the hours of 11pm and 6am.

Getting there: Grant Park is bordered by Randolph and Roosevelt to the north and south and by Michigan Avenue and Lake Shore Drive to the east and west. There is a parking garage underneath the park that can accommodate nearly 2200 cars. The Red and Blue EL lines stop at Jackson and State, just a few blocks from the south entrance while the Brown and Purple lines stop at Harrison and State to the south or Wabash and Randolph to the north. The Roosevelt, Randolph and Van Buren Metra stations provide access from outside Chicago, and buses run continuously up and down Michigan Avenue.