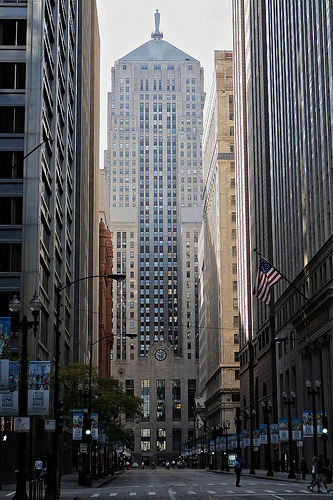 Named for the “loop” made around the city by the elevated train tracks, the Loop is Chicago’s central core and major business district. While the Loop offers plenty to see and do during the day, it can get pretty quiet in spots at night. You see, few people actually make their home within its boundaries, as downtown rental rates are exorbitant. However, because the Loop offers many hotels (especially for business travelers) and is home to the theatre district, most visitors will still find themselves spending quite a bit of time here.

The boundaries of the Loop are pretty much boxed in by the train tracks at Wells Street to the west, Wabash Avenue to the east, Lake Street to the north, and Van Buren to the south, though most people consider the Chicago River to be a more accurate east/west/north boundary. If you stretch its borders to the river, Chicago’s Loop is second only to Midtown Manhattan in size.

The landscape of the downtown Loop is dominated by skyscrapers and is home to some of Chicago’s most famous and recognizable buildings including the Willis (formerly Sears) Tower, the tallest building in the US. The Loop is also home to several of the city’s important government buildings, like the Richard R. Daly Center.

Chicago’s Theatre District is located in the Loop as well, and while the Magnificent Mile may be the most famous spot to hit the expensive designer shops, the Loop’s State Street is also a great place for shopping. It’s home to discount stores like Filene’s Basement and H&M, as well as the original Marshall Field’s store (now a Macy’s). Many of the city’s festivals also take place here in Grant Park at Daley Plaza.

South of Grant Park, Museum Campus contains Chicago’s famous museums like the Art Institute and Shedd Aquarium. Restaurants in The Loop tend to be casual spots to grab a quick lunch to go, expensive “status” restaurants where business people wine and dine their wealthy clients, or overpriced touristy places. There are of course, some exceptions to this rule though.The Gage, across from Millennium Park, serves delicious and creative takes on pub fare Giordano’s offers Chicago’s famous deep-dish pizza in a convenient location.