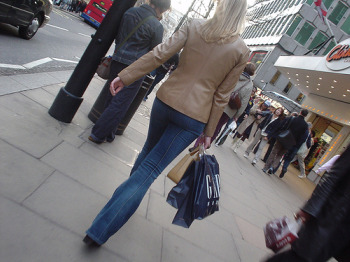 Chicago is a shopper’s paradise. Whether you are looking for high-end luxury items, trendy but budget-friendly duds, or one-of-a-kind designer items, there’s a shopping area with perfect stores and boutiques for you.

The Magnificent Mile
The Magnificent Mile, named for the many luxury shops, highrises, hotels and restaurants that line the street, was once the exclusive domain of only the most well-heeled shoppers. The pricey shops like Burberry, La Perla, Chanel, and Gucci, are still there, but in recent years they’ve been joined by more affordable chain stores like Forever 21 and H&M. Water Tower Place, a multi-story mall, is home to additional chains like Gap and Banana Republic and the shops at 900 N. Michigan include a JCrew and Williams-Sonoma.

Bucktown
Those looking for one-of-a-kind designer clothes should head to Bucktown. Damen Avenue, from Webster to just south of Armitage, is home to dozens of boutiques that offer unique and trendy clothing from both local, up-and-coming designers, and famous names. You’ll also find some great home decor stores and a few thrift and consignment stores in this area.

Lakeview
The areas near the the Belmont Red Line el stop (on Belmont between Sheffield and Broadway) plus Broadway between Diversey and Addison, are full of shops that cater to the young, trendy, and frugal. Several shoe shops and thrift stores line these Lakeview streets, along with boutiques that offer plenty of “disposable clothing” – $20 tops and dresses that are perfect for a night on the town but likely won’t last you more than one season.

Lincoln Park
If you’re looking for high-end designer clothing, and you have the cash to spend on it, head to the shops in Lincoln Park. Wander Armitage between Clark and Sheffield, and Halstead between Wrightwood and North Avenue, and you’ll find designer names like BCBG, Cynthia Rowley, Furla and Arden B. There’s also a Barney’s Co-op, where you can hunt for a designer bargain.