Where to Eat and Drink Near Wrigley Field 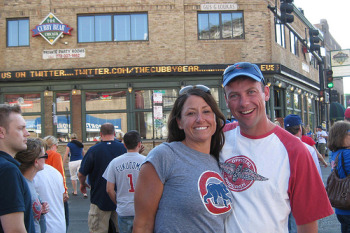 Most people attending a game at Wrigley Field tend to make a day of it, starting with pre-game meals and drinks and ending with a few more (usually consolation) drinks after the game ends. Basically, it’s a very good thing that it’s so easy to take public transportation to and from the field. If you’re looking to pad the stomach for a day of drinking or fuel up for the big game, here are some places to eat and drink near Wrigley Field.

For the party people

Moe’s Cantina (Clark, south of Addison) – To be honest, Moe’s doesn’t have a lot of fans. Most people rate it as needlessly pretentious, overpriced for drinks, and far too full of “douchebags” to be anything but a last resort. Yet, the place is packed quite often – usually with very intoxicated college-age kids – so it clearly has some appeal.

The Captain Morgan Club (at the ballpark, entrance on Addison) – When a bar is named for a liquor brand, you know it’s not exactly trying to offer fine dining. Sandwiches, pizzas and pastas are served for about $10 each, but the bigger draw for most people is the easy access from the ballpark and the festive atmosphere. The drink menu is very limited, but most of the patrons don’t seem to mind.

For the budget travelers

The Dugout (next to the Addison el station) – The Dugout would be easily missed, if not for the incredibly loud top 40 hits being blared from its stereo. It’s located in a small brownstone under the el, frequented by college students, and a bit of a dive bar. But it offers dirt cheap drinks, beer pong, and the option to bring in your own carryout.

For the die-hard fans 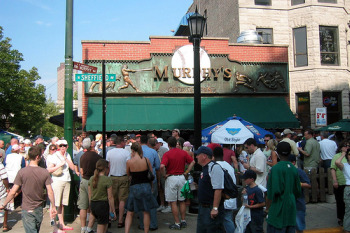 The Cubby Bear (Addison, just west of Clark) – The Cubby Bear is not the place to come if you’re looking for a low-key experience. This is a party bar, a place to celebrate the Cubs’ win or to drink until you don’t even remember that they lost. Most of the clientele are young fraternity and sorority types or suburbanites in for the game. That’s not to say it’s terrible; you just have to be looking for a certain type of atmosphere (or sufficiently sauced) to appreciate it. They serve the expected burgers and beers, which are decent if overpriced.

Harry Caray’s (Sheffield, just south of Addison) – named for the beloved announcer, Harry Caray’s offers nostalgia, kitsch, and surprisingly decent food. Burgers and pizzas are under $10 and beers are around $4. On game days the place gets incredibly crowded, but on off days it’s quite relaxed and there are some great daily specials.

Murphy’s Bleachers (Sheffield, just north of Addison) – Probably the most popular Cubs bar, Murphy’s is always packed before and after the games, but it’s easy to see why. Typical pub grub like wings, pizza, and burgers are served, with lots of options under $8. The beer list is extensive, with offerings far beyond the standard ballpark Bud Light; local and imported microbrews are served along with an extensive scotch selection. If you can’t snag tickets to a game, the front patio just outside the ballpark is the next best place to be.

Rockit Wrigleyville (Clark, just north of Addison) -If you aren’t wearing your skinny jeans, you may feel a bit out of place at Rockit, a see-and-be-seen kind of place. Despite the hipper-than-thou attitude of some of the patrons, the staff is fairly friendly and the food is very good. It’s a bit on the pricey side, with entrees ranging form $10-$35, but many people rave about the Sunday Bloody Mary bar.

Risque Cafe (Clark, south of Addison) – Risque Cafe is known for it’s amazing beer selection, and the lusty pinup girls that decorate its walls. Thanks to the…well, “risque” movies shown at night, it’s not a family-friendly place, but it is a good choice for those looking for a trendy spot to sample hard-to-find craft beers from around the US.

For the beer connoisseurs

Sheffield’s (Sheffield, just north of Belmont) – On summer days pre- and post-game, the beer garden at Sheffield’s is the perfect place for those who crave something more than a Bud Light. Sheffield’s offers one of the best beer selections in the city, with options ranging from cask conditioned and local drafts to rare bottled beers from around the world.

Goose Island (Clark, south of Addison) – Goose Island is a bit of a mixed bag. Once of Chicago’s local breweries, it produces some excellent quality beers, like Matilda and Bourbon County Stout. The food is pretty good too, with heaping portions served at reasonable prices. On game days, service can be spotty and the place gets incredibly loud and crowded though, so if that’s not your scene, it’s best to go elsewhere.

For families, couples, and sober spectators

Mullen’s on Clark (Clark, just south of Addison) – For a sports bar feel without the crazy drunken shenanigans you’ll find at some of the other Wrigleyville spots, Mullen’s is perfect. Beer is reasonably priced and the food portions are huge. It’s usually crowded but not packed, and the small back patio provides extra space. There’s also fooseball and darts to keep non-drinkers entertained.

Andalous Moroccan (Clark, north of Belmont) – As you go further south on Clark, you begin to run into less crowded, more relaxed and quiet bars and restaurants where you’re more likely to dine alongside other families and couples on dates than with drunken fans. Andalous – a BYOB – offers reasonably priced and filling Moroccan dishes like tagines and pastillas. Next door, Socca is the place to go for Italian and French-inspired small plates.

Photos by terren in Virginia , wallyg