Holidays and Events in Chicago 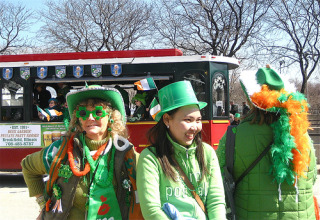 Residents of Chicago love to party and it seems we’ll take any excuse to celebrate. From New Year’s Eve through the calendar to Christmas, every month offers plenty of opportunity to experience a holiday or special event in Chicago.

Throughout winter, the city hosts several special events designed to keep Chicagoans from realizing just how cold it really is outside. There are snow-sculpting festivals and outdoor family-fun days scheduled throughout January, February and March. Of course, things really start to heat up around February, as lovers come to the city to celebrate Valentine’s Day at one of Chicago’s romantic restaurants. In March, St. Patrick’s Day, one of the city’s wildest celebrations, takes place with a parade, the annual dyeing of the Chicago River, and thousands of pints of green beer.

A few weeks after Easter, the season of neighborhood festivals kicks off, as does the season of outdoor farmers markets.  The downtown Memorial Day Parade is held on Memorial Day in May and the Chicago Blues Festival – the largest free blues festival in the world – takes over Grant Park in June. At the end of June though the 4th of July, visitors to the Taste of Chicago can listen to live music and sample some of the city’s best treats from hundreds of area restaurants. June is also Gay Pride Month, and the Gay Pride Festival and Parade is held mid-month each year in Lakeview.

In mid-July, Chicago SummerDance begins. This eleven-week free festival features live music and dance lessons on a huge dance floor in the middle of Grant Park. The Chicago Air and Water Show, a two-day extravaganza of daring aerial stunts, is held each August,  as is Lollapalooza. The Chicago Jazz Festival follows in September.

As the air turns cooler, Chicagoans start planning their costumes for Halloween, a night when the kids trick-or-treat and the adults dress to impress at the local bars and clubs.  The annual McDonald’s Thanksgiving Parade is held the third Thursday of each November and a few days later, the Christkindlmarkt opens in Daley Plaza, where it is held daily until Christmas. The year closes out with a bang on New Year’s Eve. While some residents opt for a house party, others spend the last night of the year dressed to the nines at their favorite nightclub.